The future (very soon) will probably imply food shortage or at least shortage of space to grow it. Countries like Saudi Arabia and China are buying land to produce feed to produce meat for a growing population.

Other countries like yours and mine are buying land as speculation. Among the largest buyers are state owned pension funds. This phenomena is called land grabbing and it’s nothing new but it doesn’t make it right. It usually means that land is sold by governments (often corrupt and indebted to the world bank) that have normally “grabbed it” from poor farmers who can’t afford the legal paperwork they need as owners, but have beed living on it and feeding from it for generations.

In a BASF chemical lab somewhere in Germany, the best payed chemists are trying to create artificially grown meat in petri dishes. By taking a small biopsy from a living cow they can theoretically produce 100 metric tons of meat. The problem is that it is made at a huge cost. Now, it seams China i recommending their population to eat less meat.

If we are to talk about animals in economic terms, and I guess I should in this blog, according to the study Nature Climate Change, published in Nature, meat and dairy  are the least profitable sources of nutrition. 97,4% of the cost to feed them is lost. No other industry would consider such a lousy ROI. It is only viable for the meat and dairy industry as they get most of it covered with subsidies weighing heavy on the torn world economy and tax payers.

It is surely no news by now that the cattle industry is the leading cause of the “land grabbing” and global warming, one reason being the flatulence and burps that these poor animals release in the atmosphere that contains methane, which is 25 times worse than the CO2. The overuse of farmland contaminates our waters with harmful algal blooms (HAB). These change the sensitive microbial balance, one is the growth of BMAA, a neurotoxin, that kills living creatures such as us. It’s linked to Alzheimer’s, Parkinson’s and ALS, the later is a horrible disease where you choke to death. We get it from the seafood and fish. Deforestation to grow the animal feed and the following erosion are other side effects that animal sourced food has on its conscious. The only hope is if we can stop the demand for animal food, and let the trees, plants and our friends, the bugs and bacteria, recreate the balance.

Besides these issues we have the shortage of fresh water. As 1 kilo of meat requires 15000 liters of water, I would consider animal produce to be luxury goods. If you read my blogs, books or attended my class, you know it’s one of the leading causes of modern disease too. Adding the suffering it causes, I really see no good and no reason to eat any animals, eggs or dairy.  I hear some say it tastes good, so I consider it as candy, just like sugar. 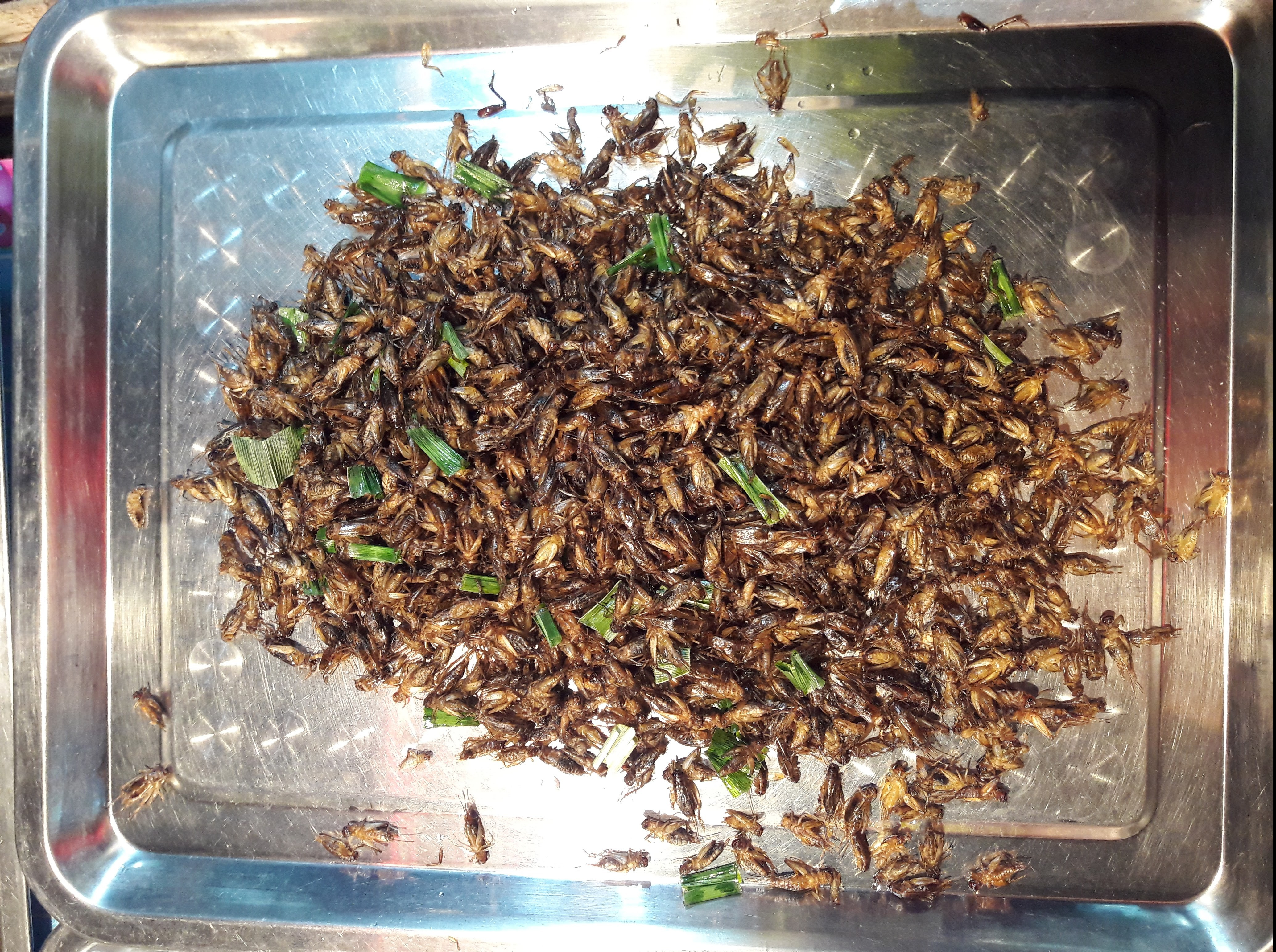 If you are still reading I would do you no favour to say that poultry, eggs, and fish is a better option than meat and dairy, so I won’t lie to you. There is really only two ways to feed ourselves the next coming 30 years, and certainly if we live beyond that, and it’s by eating insects or by being vegan. Insects are traditional food in Thailand and many other countries that are much healthier than western ones. But why eat insects, why not go vegan? It’s by far the healthiest for all.

I much rather see you becoming 100% vegan, even if you need time, going 30%, to 50% and so on. I really don’t see why we need to eat insects either. The small ones are more needed than us on this earth so if we are to become ecologists and stop killing for once as a race, we can’t eat insects either. The earth can’t survive without ants and some other bugs. Plants won’t survive without the bees, butterflies, or other small creatures, but I’m sure the earth would thrive without us. The bugs are not bugging us, they help us.

I'm an Ayurveda Practitioner and certified Yoga teacher (Master level) and my mission is to make this beautiful healing theory easy for everyone to use in their daily life to stay healthy and heal. Considering that we invented and dumped some 120.000 petrochemical derived substances since 1945 getting healthy will most likely include a detox. My love for Ayurveda started in 1993 with Deepak Chopra and after a few turns in life I quit my job as a Nordic Brand Manager at the largest Swedish telecom and re-schooled. I have studied with Dr. Lad and Dr. Siva (Pune, India), and I practiced a lot more which is what makes the difference. I added Orthomolecular Medicine (USA/Spain) and herbalism. After teaching since 2005, I dig down in the original Sanskrit scripts to understand it fully and I fall in love with the concepts over and over again for every sutra - love affair that created a few books (Amazon) many events and consultations, and I'm still in love 💚🌿💜 Events and about: https://oliveretreat.com/about/ Books: https://www.amazon.com/s?k=cristina+azcarate&i=digital-text&ref=nb_sb_noss View all posts by O• L I V E

One thought on “Bugs Are Not Here to Bug Us”