Often we rely on fish or chicken for our protein intake when our bodies shout out that they have had enough of meat in life. It’s much easier for us to digest white, small fish than meat, probably because we have eaten it so much longer as a species. We moved from the centre of Africa out to the coastal areas before we went north to colder areas and started eating meat, so our bodies are a few hundred thousand years better friends with fish meat than bird, cow or pig meat, which require much more digestive fluids to break down, and leave us with an overflow of acid residue.

So what makes us all of a sudden see an increase in diseases like diabetes as fish eaters, when before we saw the health properties these friends offered us? Pollution! Now there are studies that show the correlation between fish consumption and diabetes, CVD and even mental disease, as this study shows fish eaters have a 38% higher risk for some chronic disease. Mercury is a long known poison to enhance depression. Personally I believe the studies that show high levels of pollution in meat and poultry as well, but it is the big fish that eat small fish like tuna, that have accumulated the poisons; PCB, heavy metals, plastics and much more. 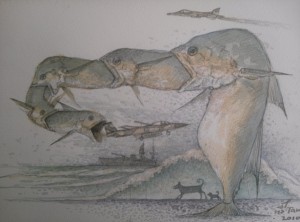 As with meat, fish is not entirely just fish today. We have polluted the seas, lakes and rivers in the name of progress. So much that we can hardly find any clean fish on the earth, not even farmed ones. Also, sea life is generally more sensitive than land animals so if they don’t vanish from our pollution, they will die out as food on our plates. If we continue to eat as much as we do today, with the increased population, we won’t have any of the fish we eat now in our waters by 2048. Some believe fish like tuna, cod and wild sardines will be history already by 2025. How long they are going to exist before becoming extinct nobody knows for sure, but there is no question that they will all be gone within a generation from now…if we don’t stop eating them. Yet another reason to become vegan or at least semi-vegan.

I'm an Ayurveda Practitioner and certified Yoga teacher (Master level) and my mission is to make this beautiful healing theory easy for everyone to use in their daily life to stay healthy and heal. Considering that we invented and dumped some 120.000 petrochemical derived substances since 1945 getting healthy will most likely include a detox. My love for Ayurveda started in 1993 with Deepak Chopra and after a few turns in life I quit my job as a Nordic Brand Manager at the largest Swedish telecom and re-schooled. I have studied with Dr. Lad and Dr. Siva (Pune, India), and I practiced a lot more which is what makes the difference. I added Orthomolecular Medicine (USA/Spain) and herbalism. After teaching since 2005, I dig down in the original Sanskrit scripts to understand it fully and I fall in love with the concepts over and over again for every sutra - love affair that created a few books (Amazon) many events and consultations, and I'm still in love 💚🌿💜 Events and about: https://oliveretreat.com/about/ Books: https://www.amazon.com/s?k=cristina+azcarate&i=digital-text&ref=nb_sb_noss View all posts by O• L I V E