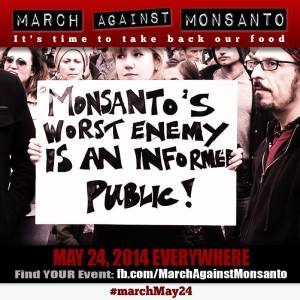 You’ve probably heard of the big company Monsanto: the one that rules Codex Alimentarius, the so called UN authority that rules you every time you eat, that hasn’t got government representatives at all, but representatives from the big businesses ruling agriculture and food production, and much more. They decide what you put in your mouth, how much pesticides (that they produce) is lethal, etc. They decide what is healthy and not healthy, and the criteria for the science behind it, how much an additive your body can take and in what combination with other chemicals. Can you see why one of our main recommendations is to buy non-labeled food. An apple doesn’t need a label, the apple juice does. Now we just hope they turn it around and make pesticide users label (and take the cost of the control) and not the organic farmers that farms like they’ve always done.

As they make the rules on levels and interactions in-between the chemicals, and how the studies have to be done, they rule. Of course they have decided for themselves that they don’t have to study how one additive effects you or your kids, with three other additives or a pesticide, in the same “food”. Their “recommendations” goes via the UN to the different food and pharmaceutical authorities, often via FDA (the american one) first and from there to the rest of the world’s authorities that don’t put much effort into checking it…until now! In the last 5 years I have seen a huge change of awareness and it makes me happy and hopeful. Not enhanced by the authorities that gets more than 50% of their budget payed by the industry they are supposed to control, but from the consumers. I’m optimistic, it will come up on the political agenda sooner or later, and those parties will be voted for, I’m sure. Food is too important, it affects our body and mind, and the earth. To become vegan and eat organic, you automatically become “green”. It is the easiest and quickest way to stop global warming and a lot of pollution. It’s our future.

To explain the culture in Codex, I only have to describe the big enterprises ruling it. There are five Big Business Areas and only large companies are allowed membership. BigAgro, BigChemo, BigPharma, BigFood, and Machinery for those areas. Monsanto, a BigChemo & Agro company, wants to patent and own all the seeds on the Earth! They make hybrids (not fertile) seeds to sell to farmers so they can’t collect their own seeds to plant for coming years. They patent them and sue the farmers that didn’t read the small texts on the contract. Indian farmers are right now the professional group that commits most suicide as a result of loosing their farms to BigFarms that Monsanto control. They are so poor that they drink the “free” pesticide from Monsanto. Do I need to say more?

In the USA they have already taken over the farms and are getting help from the Clintons to do the same in Europe. What amazes me is that they actually think they do good – check their site. Disproven over and over again, they still say that it is to stop hunger in the world. Ridiculous! I have talked to people that work there and they still believe that GMO self-pesticide-spraying soy beans, killing everything around them, are good for us and our ecology! Like at BigPharma you wont find highly educated doctors or chemists in the sales force. They pick young uneducated guys to “educated” them with their propaganda, so that they can convince the farmers to sign over their farms. The have huge law departments and spend huge amounts on suing farmers for using their patented seeds, and on lobbying but they claim that it goes to research. The car industry has much higher RDC then BigPharma and BigChemo together.

How can anyone proclaim themselves God and want to own every little seed that nature gave us during the 38 billion years it has been developing? What in the human belief has made us think we can own nature? Not surprising Codex was founded by Herr Faber, a famous Nazi that was convicted in the Nurenberg trial as his company produced and sold the cyanid for the gas chambers. After (and during) his time in jail the American oil industry crafted Codex, WHO and the UN with him and other Nazis. They understood that those who rule food production will also sell the pharmaceutical drugs whey will need.

When we used pictures like the one above before, we have been spammed, but I’ll take the risk again and post it for a while. Find your event the 24th of May if you think this is important, sign petitions, start petitions, what ever fits into your life. See it as a mind detox, because to act is. OO7 #7: Action is the first solution. https://www.facebook.com/MarchAgainstMonstanto

2 thoughts on “Want to Do Something Mind Detoxing?”