More on coffee – thanks for all your e-mails, I’ll try to answer some of them today. From the last blog on this theme, I had questions regarding if I like the taste of coffee. Yes, I do! I even adore coffee and black tea. What I do when I take it away for a while is to allow my body to go back to it’s natural rhythm for a few months to get rid of the addiction, and later I will allow myself a high quality coffee or black tea, once in a while. I can also use it’s effect occasionally when I have to perform, typically when I travel for work. But then if I begin to feel addicted I will cut it out again. This is part of detoxing. Maybe I won’t like the taste one day, as we all change our tastes too. Until then the negative effects are not so bad for me, as with meat or sugar, which I don’t have any problem to stay away from. But don’t ask me, ask yourselves!

There are several issues with coffee, but the main one is caffeine. It is nature’s strategy to make bees and animals get addicted and come back for more pollen and seeds. It’s a central nervous system (CNS) stimulant. It is a member of the class of methylxanthine chemicals/drugs. Xanthines (specifically theophylline) are commonly used in medicine to aid in breathing for example for asthma patients. Theobromine, another xanthine derivative, is found in cacao (chocolate) and tea, also sources of caffeine. 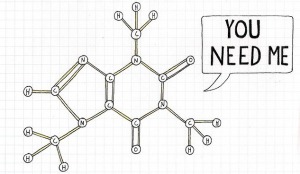 Caffeine causes us to have a stress reaction. A dosage of 50 to 100 mg caffeine, the amount in one cup of coffee, will produce a temporary increase in mental clarity and energy levels while simultaneously reducing drowsiness. It can also improve muscular coordination. Probably this is why many employers love to provide free coffee to their employees – to keep them awake and working hard! This is all good, but not for long. Excuse me if I repeat myself, but when we over-consume something our bodies clearly signal us: NO! That’s when health issues arise if we continue beating ourselves up. Know your limits! Talking about coffee, heart palpitations and increased sweating, followed by drowsiness a few hours later, and bad sleep at night, are clear signals don’t you think?

Through its CNS stimulation, caffeine increases brain activity, which sounds good, however, it is through stimulating the cardiovascular system, raising blood pressure and heart rate through the release of noradrenaline and adrenaline from the adrenal glands (more on this later) and it is the main reason for not being able to recommend it. We normally have enough of those stress hormones anyway. If you are going to drink it it’s good to know the so called Circadian clock, or normal cortisol release during the day, to compensate with coffee. It normally looks like this, following the sun hours:

Since caffeine can be a ‘‘drug’’ the amount needed to produce a stimulation increases with regular use, as is typical of all addictive drugs. If I would have invented coffee and wanted to register it to sell I most probably wouldn’t be allowed to, just like sugar, mainly as it depletes us on nutrients. As it existed before the regulations were made, as a rule we allow it to protect the industry, like tobacco. Whereas Cannabis Oil is well known to kill some tumors, but is still mostly illegal. No “new” addictive drugs are allowed to be sold as alimentation today. But the alimentary law is another long story.

You might say that caffeine (and coffee) is not nearly as dangerous as other drugs. It’s not, but still, the effect is the same, just at another level of degree. The classification of a drug is that you ‘‘need’’ it to function relative to a health cost, and if you get withdrawal symptoms. We do know that caffein affects some more than others, just like any drug. If you are one of those that ‘‘need’’ it, that’s enough for me to recommend you to stop drinking it gradually. I would need a very long list of benefits to be able to recommend it, and in most cases I don’t see that. I’m sorry, for myself too as I love coffee and black tea! But I’m one of those who feels the negative effect. Here is why:

To end the coffee story for now, as we are here to advice on health at Olive Retreat we teach you to take away the obviously unhealthy as much as you can, and for the not so obvious, we teach you throughout the whole retreat program with body and mind exercises, how to feel what is good for you and what is not so good for you. Let your body speak!

3 thoughts on “Caffein Is A “Nice” Drug”